The centerpiece of the City of Alexandria’s $100 million strategy to ensure it can meet electricity needs and stabilize rates is expected to be in place in one year. City officials and others gathered Thursday at the D.G. Hunter Generating Station – the city power plant – to highlight the start of a project in which seven new “rapid start” generators will add to the city’s generating capacity.

The project is a critical piece of the Alexandria Utilities Sustainability Project, known as AUSP, to stabilize electricity costs in the long term and to provide more capability for the city to generate its own power when needed.

“It will keep us stable for 20 to 30 years out, without question,” Mayor Jacques Roy said. “It gives us a lot more predictability. It makes sure that when there are fluctuations, we are in a position to handle those without it affecting you at your home on the bottom line. … This allows us to remain very stable with low-cost, super-efficient power to our citizens.”!

There are seven generating units that will be used for this project. Each unit weighs about 130 tons and is capable of producing about 9 megawatts of electricity. They are projected to be in operation by January 15, 2016. The new generators are “natural gas-driven, reciprocating internal combustion engines” that can be up and running in five minutes.

Roy outlined the project and thanked the many parties involved Thursday before a ceremonial groundbreaking in which he, Councilmen Harry Silver, Roosevelt Johnson and Jim Villard, Utilities Director Mike Marcotte and others turned shovels of dirt to celebrate the project.

Marcotte, who has been working on plans for the long-range electrical needs of the city since 2008, said “that because of the new generators’ efficiency, there will be times when the city power plant is called on to produce more power for its customers rather than to purchase power and rely on its other power resources.”

The quick-start capability of the new generators will be important during emergencies as well as for “demand response,” he said. “It could be a revenue stream. If we don’t need the power that day, we can run it, sell it on the market, and it’s just revenue.”

Summit Industrial of Alpharetta, Ga., has a contract around $40 million to handle construction of the power plant infrastructure, buildings, site work and installation of the Wartsila engines. About 150 to 200 workers from various subcontractors, including local ones, will be involved. Zachry Engineering Corp. of Houston, Texas, is the engineer on the project.

The city’s AUSP, given the green light by the City Council a couple of years ago, is designed to increase the city’s fuel diversity for electricity and put the city on solid footing to meet power needs for more than 20 years.

The city has relied on coal for about 80 percent of its overall fuel supply, but that will be reduced to about 47 percent, while natural gas will increase its role from about 17 percent to about 50 percent, according to a description of the AUSP. About 3 percent of the city’s power comes from hydroelectric.

As part of AUSP, the city previously bought the Bayou Cove natural gas-fired unit for about $27 million. AUSP is being financed by the sale of revenue bonds, to be paid back over about 22 years.

“This is a rate stabilization project. … This is trying to stabilize the rate, and with the low cost of natural gas, the timing is just perfect,” David said.

Read the full article and watch the video here. 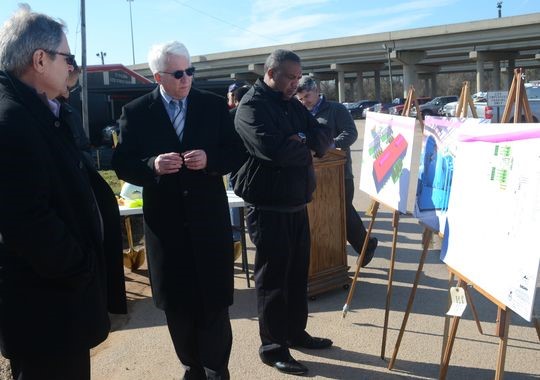